Review of the administrative doctrine on the RTC and the ITC: What about outsourced research expenses?

We published a preview of the main issues affected by the revision of the administrative doctrine on 13 July 2021. In this second summary article, you’ll find the important legislative and jurisprudential. The new administrative doctrine was particularly awaited in view of the important legislative and jurisprudential developments that have recently occurred in this area.

Consequences of the end of doubling: expenses entrusted to public and assimilated bodies are eligible under the same conditions as those incurred with private service providers

The Finance Law for 2021 has aligned the rules for considering in the RTC expenses incurred with public and assimilated bodies with those incurred with private providers. The new administrative doctrine comments incorporate these provisions by specifying that starting on 1 January 2022:

This topic is described in our article “Finance Law for 2021: a new cut in the RTC system“.

The new administrative doctrine revises and simplifies the conditions for eligibility of outsourced services.

The first distinction is made between outsourced operations depending if they constitute R&D operations in the strict sense of the term:

Furthermore, the administration distinguishes between two types of contractual relationships that govern the outsourcing of R&D operations, subcontracting and collaboration, both of which are eligible for the RTC.

For the first time, the administration admits the eligibility for the RTC of expenses incurred in the context of a collaboration contract. This position was not obvious considering that the case law adopts a restrictive interpretation of the term “entrusted” in Article 244 quater B of the French tax code and requires a real framework and supervision from the principal (Administrative Court of appeal of Paris, SARL Pharminvest Patrimonial, n° 15PA01598 of 01/12/15 et Administrative Court of appeal of Paris, Association Races de France, 30/05/2017, n° 16PA00453 and n° 16PA00455). 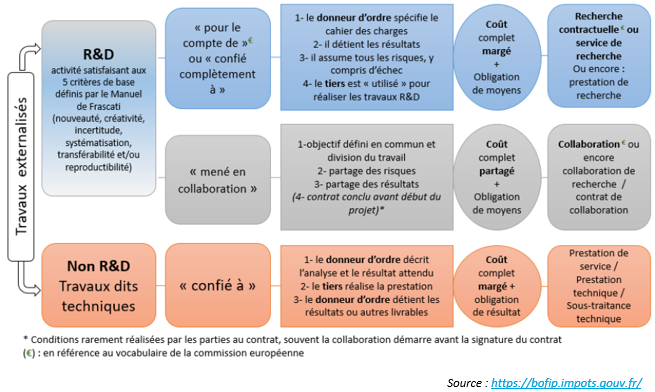 Regarding the supporting documents, a research collaboration contract defining, among other things, the contributions to its costs, the sharing of risks and results, the dissemination of results, the rules for the attribution of intellectual property rights (IPR) and access to them must be concluded before the start of the project (in principle).

In this case, invoicing is also regulated since it must concern eligible expenses relating to a financial flow provided for by the collaboration contract and the party issuing the invoice does not include these expenses in its own RTC. It is specified that the amounts invoiced do not include a margin.

Unlike its historical position on the subject, the administration specifies in §172 of its new doctrine that ” Expenses relating to externalized scientific and technical work which do not as such constitute R&D operations but which are essential to the realization of an R&D operation eligible for the RTC carried out internally by the principal, may also be taken into account in the RTC calculation basis of the principal company. These operations are assessed in the same way as if they were carried out internally by the ordering company. In addition, it incorporates the contribution of the FNAMS decision handed down by the State Council on 22 July 2020 (Concil of State, 22 July 2020, n°428127, FNAMS).

This topic is described in our article “Subcontracting eligible for the RTC: the end of more than 5 years of tax uncertainty”.

Since the 2020 Finance Law which provides a framework for cascading subcontracting (Law no. 2019-1479 of 28 December 2019 on the 2020 Finance Law), externalised operations must be carried out directly by the public or assimilated research organisations, or approved private organisations to which they have been entrusted. However, by way of derogation, these first-tier service providers may call upon other eligible organisations to carry out certain scientific or technical work essential to the research operations entrusted to them.

This topic is discussed in our article ” Adjustment of research tax credit, innovation tax credit and collection tax credit ” published in the Tax Law Review No. 1, 8 January 2020, comm. 22.

The administrative doctrine indicates that if these second-tier service providers themselves call upon other tier 3 organizations to carry out certain work, the share of expenses relating to this tier 3 work is not eligible for the tax credit for the principal.

Finally, following the decree 2021-784 of 18 June 2021, obtaining approval is subject to the organization’s justification of its capacity to carry out R&D operations by its own means.

This point is analyzed in our article “New decree on the RTC: one step forward, two steps back”.

The Research Tax Credit (‘RTC’) 2020 Guide has just been released … could it be that the Ministry of research have a short memory?

The Future of Transfer Pricing – Focus on France

Lawyer with a background in tax law, Marion advises her clients on R&D support schemes, as well as on support schemes for environmental and industrial projects. Within the framework of […]