This article was first published on Tax@Hand, and is reproduced on this blog with the authorization of its authors.

France’s 2023 draft finance bill was released on 26 September 2022. Parliamentary discussions should begin on 10 October and are expected to be finalized by the end of December 2022 with a vote and enactment. The developments below summarize the bill’s main tax measures.

Note that, at this stage, the draft finance bill does not contain any provision related to the implementation of public country-by-country reporting (CbCR) or Pillar Two.

The CVAE applies at a single rate of 0.75% to the added value produced by a company. However, a digressive allowance is available depending on the company’s turnover, impacting the CVAE’s effective tax rates (ETRs).

The draft bill would divide these ETRs by two, as illustrated in the table below: 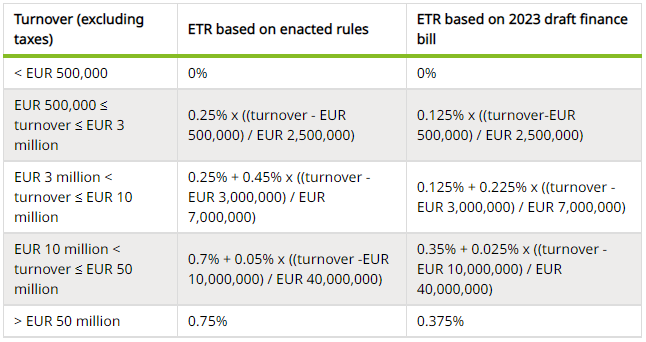 The rate of the additional tax applicable on top of the CVAE would be doubled (from 3.46% to 6.92%) to remain at the same amount.

The changes would apply for the computation of CVAE due as from 1 January 2023.

As from 1 January 2024, the CVAE (and the associated CVAE additional tax) would be abolished.

Although the changes to the CVAE rules would apply as from 2023, they could impact consolidated financial statements for the fiscal year ended on 31 December 2022 if enacted before 31 December 2022. To the extent that CVAE is considered an income tax (optional under IFRS and mandatory under US GAAP), the associated deferred tax would need to be adjusted as soon as the change in the tax rate is enacted.

As a reminder, as from 1 January 2019, the income tax on most income received by French taxpayers is subject to a pay-as-you-earn system (PAYE or “PAS” in French).

Under the PAYE mechanism, depending on the source of the wages and the location of the employer, the tax due by a French resident taxpayer can be withheld by the debtor, or it can be paid in “installments” that the French tax authorities can directly withhold from the taxpayer’s account.

The 2023 finance bill expects to simplify the current situation and French-source wages paid to a French resident taxpayer by a foreign employer would be subject to the “installment” mechanism (instead of withholding) when:

In practice, the new measure mainly relates to foreign employers of cross-border employees who are French tax residents and wish to work from home.

The foreign employers affected by this measure also would be subject to a yearly reporting obligation regarding the amount of net taxable income paid to each beneficiary. A failure to comply with this reporting obligation would result in a specific fine, ranging from EUR 500 to EUR 50,000 per report.

Nevertheless, a spontaneous reporting regularization mechanism would be applicable.

This provision would apply to income received as from 1 January 2023.

Alice de Massiac, Partner, has developed extensive expertise in supporting major French and foreign multinational companies, both in consulting and tax controversy, anticipating the impact of the proposed recommendations in […]

Myriam has been working in the tax field for almost 15 years. Joining Deloitte Société d’Avocats in 2006, she went back in the law firm in 2019 as a member […]

She joined Deloitte Société d’Avocats (French law firm of the Deloitte network) in 2011. She is a manager in the Knowledge Management department.